Introduction to  Figure and Ground

This week  we’ll be discussing the concept of figure and ground. For the most part, figure and ground are easily distinguishable and it may seem like a “Duh!” concept. But sometimes, when a work is interesting, the artist is playing with our understanding of the separation between figure and ground. When an artist wants to create a sense of cohesion in a work and the opportunity for the viewer’s eye to travel around the work he or she will often allow figure and ground to merge in some places but not in others.

One way to think about the relationship between figure and ground is the use of “positive” and “negative” space. Positive space is that space where you find yourself focusing on and object (a figure) and negative space is often an open empty space (ground) where the eye can breathe a bit and your attention relaxes until it meets the positive space again. Some artists, like Gustav Klimt, played with the idea of figure and ground by forcing the viewer to flip back and forth between perceiving a subject as both figure  and  ground. Take, for instance, this section from the  Beethoven Frieze: 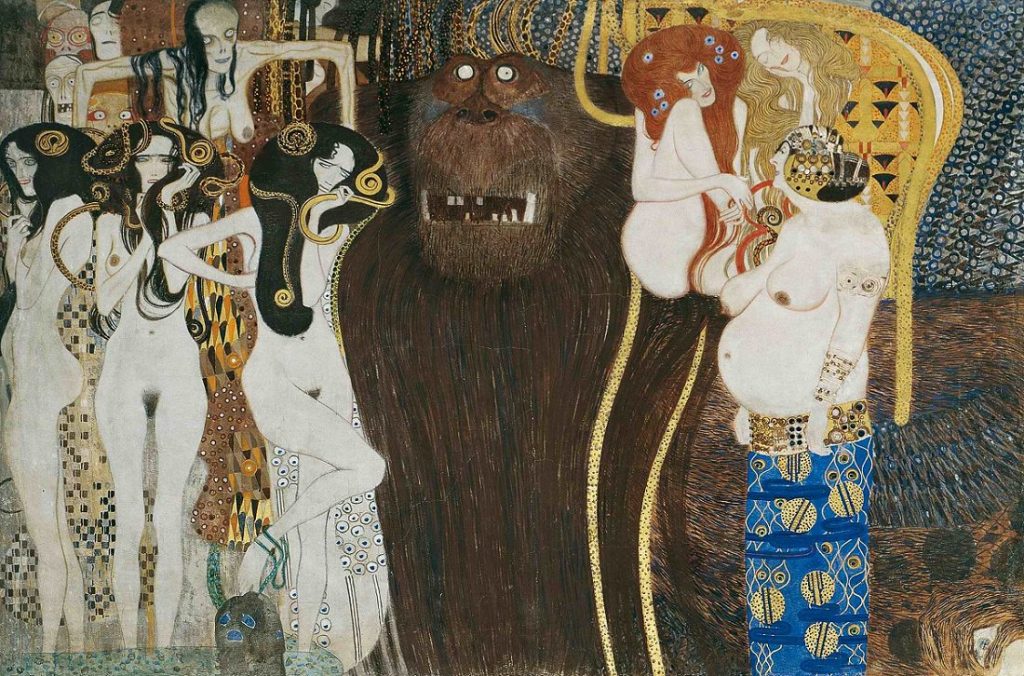 Look at the character of Tiphoeus (the monster in the center of the image). If you relax your vision some, you can perceive him as a negative space, or as the darkness against which the figures (the nude women on left and right) are standing. But it’s also possible to see the women as the ground (the look like a stand of trees in a way) out of which the figure is emerging. The sense of play and mystery that emerge from this flipping-back-and-forth-between-figure-and-ground is immensely engaging in my opinion.

Watch this video on Klimt’s Beethoven Frieze.  Listen for the use of the word “figure.”  Try watching for places in this very large painting where figure and ground merge and ask yourself why Klimt may have been playing with the concept.

M. C. Escher is another artist who was interested in the relationship between figure and ground. His work was created in a very systematic way. Try looking into the process of creating “tessellations.” Some very interesting art can be created from this method.

Simple Trick for Tesselations in Photoshop

This is a surprisingly easy way to create a tesselation. Vector Tuts are pretty reliable people for Photoshop tutorials.

A very simple visual explanation of positive and negative space at work.

Dr. Kristin Atchison talks about a very technical understanding of figure and ground and its relationship to human perception. Her slides are very helpful.

You can use the concepts of negative space in photographs to make them work for you artistically as well.

You’ll need to watch the following videos to understand how to use Photoshop to complete your assignments this week.  I’ve added a page called “Photoshop for Beginners” with a collection of videos that might help.

If you’ve chosen not to use Adobe products, you’ll have to find your own how-to videos to complete the assignments!!

How to Remove Backgrounds

Try watching this video, pausing it, trying a few of the steps, and then playing a few more steps, then doing it yourself, then repeating the process, etc.

This video will show you how to trace a drawing in Illustrator to create a vector based drawing. This video is best for those of you who want to learn to use Illustrator and those of you thinking about going into illustration and game design.

Saving and Exporting in Adobe CC

Knowing how to save and export files is pretty important and can be confusing. This video will help clear some of it up.

This week, find images that exemplify the figure and ground relationship. You must link to the original source (as original as you can find) for each pin and you should provide context and an explanation of why you think each image is illustrative of that week’s concept. Put this explanation in the notes field of each pin. 1-2 sentences will suffice. The original artist must be identified.

âŠ• For this week, create a Pinterest  Board called “Figure and Ground” and add 20 images to that board using the guidelines above.

See my Pinterest board on “Figure and Ground” for an example:  https://www.pinterest.com/madaramason/figure-and-ground/.

*NOTE:  I’ll be looking for 1) your ability to identify figure or ground and 2) your ability to remove parts of an image in a very detailed manner. I’ll zoom in to see whether you catch the details on your edges.

*NOTE: I don’t care if your work is “good” or not. I’m not looking for the overall quality of your work on these small exercises. I’m looking to see if you understand what “figure and ground” means and whether you can demonstrate the concept. We’ll get to the “good” stuff later.