Introduction to  the Grid

This week we will be discussing the concept of the grid in art. When you hear someone say “grid system” they’re often talking about a means by which an artist can reproduce another 2D work faithfully. A “perspective grid” is a particular kind of grid that assists artist in depicting one point, two point or three point perspective. Additionally, the grid is often seen as a very modern theme in art; various artists use grids  in  their work rather than simply using grids to  construct  their work.

We’ve already seen the grid at work in the concept of the Rule of Thirds. This week you’ll dive deep into the concept and its pervasiveness in contemporary art.

“The grid system is an aid, not a guarantee. It permits a number of possible uses and each designer can look for a solution appropriate to his personal style. But one must learn how to use the grid; it is an art that requires practice. ‘ – Josef MÃ¼ller-Brockmann

There is a long history behind the grid as both a guideline and a methodological approach to drawing. The image below is an etching by Albrecht Durer revealing an artist’s method for faithfully reproducting what he saw.

Most likely, an art teacher in high school showed you how to use this method to reproduce an image from a magazine. There is a short video below of this method in action. 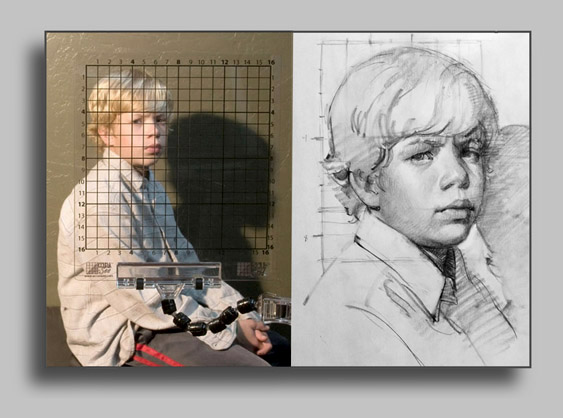 Use of perspective grids is covered heavily in drawing classes and the subject is both deep and wide.

David Chelsea has written some interesting things on extreme perspective, but if you’re looking for more traditional examples of prespective aids, this is a link to downloadable perspective grids for free that you can use in drawing exercises.

If you’re looking for digital perspective grids that you can use as an overlay, you’ll find a handful of them here (scroll down). 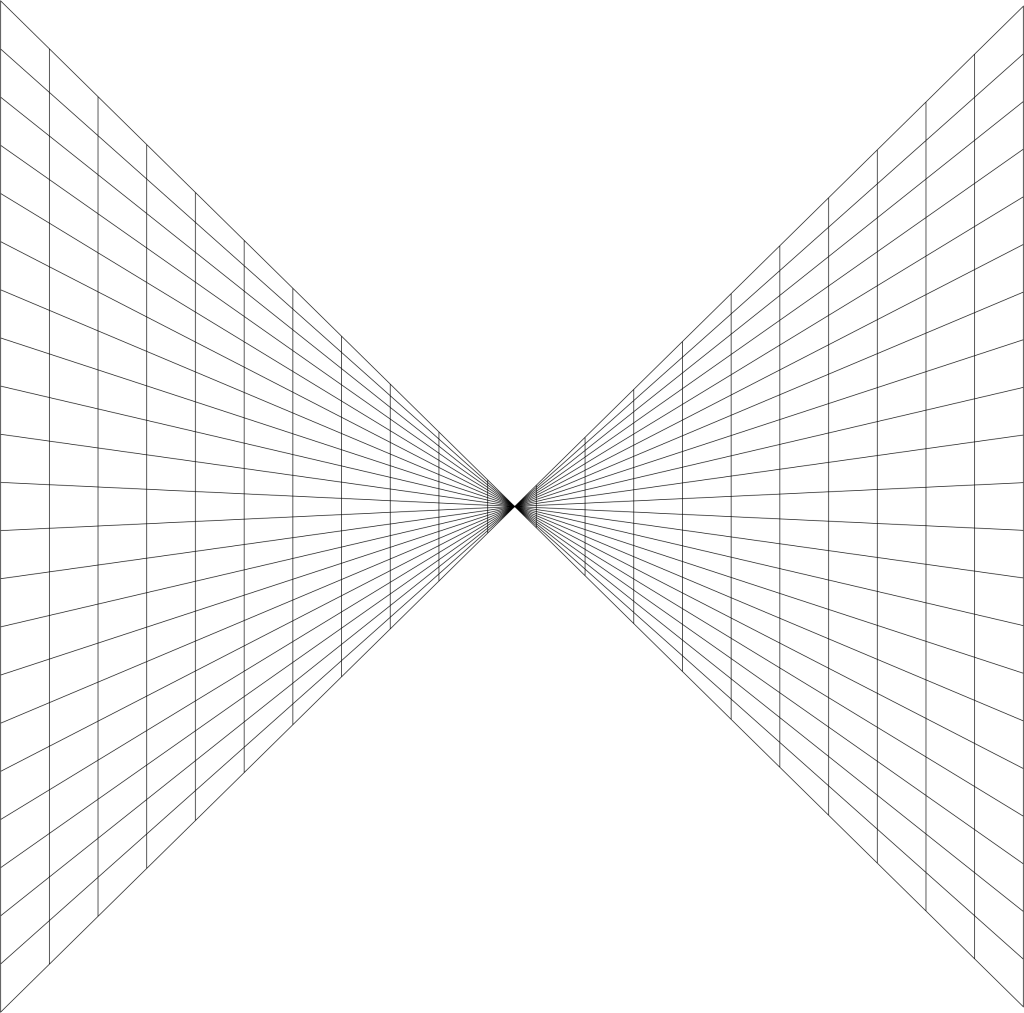 Click on this perspective grid to access the large version then save it. Like the ones above, it’s a transparent png and can be used as a layer in your work.

The Grid as a Theme

The grid has, over time, become a theme all by itself in art. This essay by Rosiland Krauss is perhaps one of the most influential pieces of writing about the appearance of the grid in art as the  subject  of art rather than the underpinning of its creation. In it, Krauss proposes that

Unlike perspective, the grid does not map the  space of a room or a landscape or a group of figures onto the surface of a painting.  Indeed, if it maps anything, it maps the surface of the painting itself. It is a  transfer in which nothing changes place. The physical qualities of the surface, we  could say, are mapped onto the aesthetic dimensions of the same surface. And  those two planes-the physical and the aesthetic-are demonstrated to be the same  plane: coextensive, and, through the abscissas and ordinates of the grid, coordinate.

Krauss asserts that the grid emerges in modernist art just as other more worldly subjects are disappearing. Once artists embark upon their journey to true abstraction, the grid is more and more often the subject of art, representing the schism that appeared in the modern psyche around the turn of the 20th century.

That’s a pretty academic way of saying that grids emerged as a subject in painting only recently. Chuck Close, in the documentary below, is probably one of the more accessible artists with work where grids feature prominently. Close is interesting to me because his portraits feature grids as both subject and organizing principle. 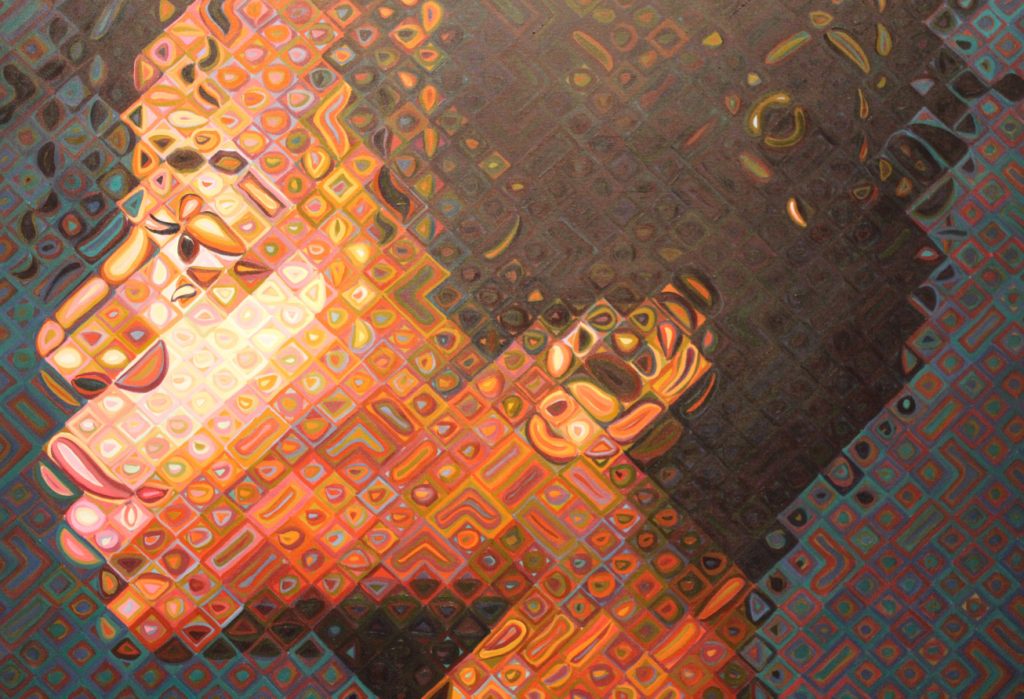 Perspective grids can be warped, and in the process, whatever is drawn on top of that warped grid becomes warped as well.

Chuck Close: A Portrait in Progress

Do yourself a favor and take an hour out of your day to watch this documentary. Chuck Close is one of the preeminent artists of the late 20th and early 21st centuries and grids play a central role in his work. He began painting at the age of 5 and has kept painting long after he became paralyzed and lost the use of his legs and even partial use of his hands.

You’ll need to watch the following videos to understand how to use Photoshop to complete your assignments this week.

This is a basic Photoshop skill. Learn it. Use it.

Tutvids are not for the faint of heart, but if you’re serious about mastering Photoshop  and illustration skills, you should try to master the vanishing point grids demonstrated in this video. Watch it once. Then watch it again with one hand on the pause button while you try everything demonstrated in the video.

Though it seems only related to photography, the reality is that many illustrators work with source images, which means that controlling photos is important.

Whether you’re creating mashup images that work as stand-alone art or using them for source material, getting the perspective right is important.

The Perspective Grid Tool in Illustrator

This week, find images that exemplify the concept of “the grid”.  You must link to the original source (as original as you can find) for each pin and you should provide context and an explanation of why you think each image is illustrative of this  week’s concept. Put this explanation in the notes field of each pin. 1-2 sentences will suffice. The original artist must be identified.

Choose images that reveal the perspective grid, the grid system, or grids as a theme.

âŠ• For this week, create a Pinterest  Board called “The GRid” and add 20 images to that board using the guidelines above. Submit your link in the form below.

Make sure you’re part of the discussions in Slack. YOU’RE in charge of making them interesting and valuable!


Choose an artwork by a famous artist that features grids or perspective grids.  In Photoshop (or whichever tool you’re using), add perspective guidelines (see the videos above) or just simple guidelines in a grid. Take a screenshot of the image with the grid and upload that as your “emulate” assigment.

Create your own work featuring grids in some manner. You have lots of latitude here, but if you’re having a hard time, use your Pinterest board as inspiration. Upload your work as a jpeg.